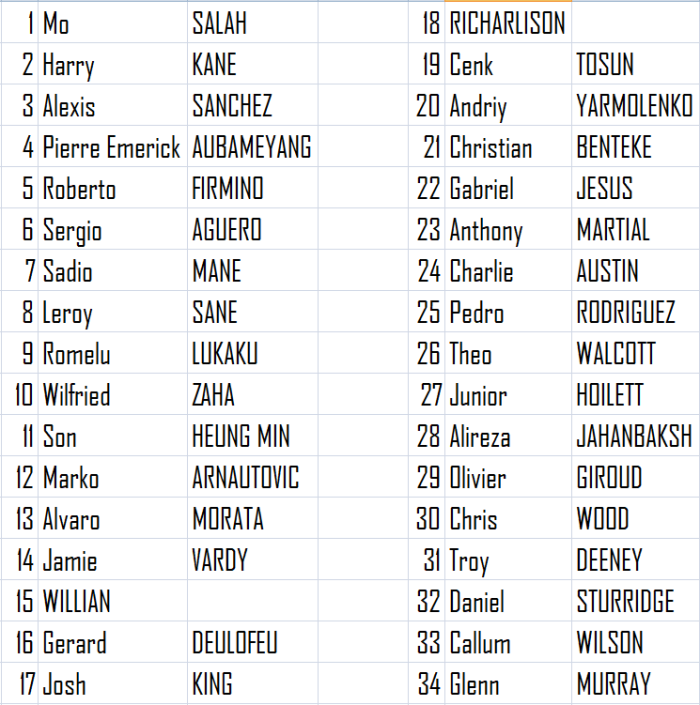 Mo Salah: A more than valid first pick of the whole draft. Due to the shortage of elite midfielders this year, I’d probably pick Kevin De Bruyne over the Egyptian King (just) but no one will scoff if you decide to plump for last year’s FPL top scorer. All eyes will be on Salah with many doubting that he will match last year’s outstanding figures. I can see Liverpool’s star man still reaching the 20 goal mark and adding in his overall contribution in the Togga scoring format, that may still be enough to see him finishing as the top scoring forward once more.

I’d expect to see Alexis Sanchez fall in a lot of drafts this summer due to a less than inspiring 2017/18 but he potentially has everything needed to be a fantasy gem this season. Coming off the back of his first football free summer for what must seem like an eternity to him and his dogs, a well rested Sanchez has looked sharp in pre-season and I expect Jose Mourinho to build United’s attack around the Chilean this campaign. Add in the fact that he dominates United’s set piece duties, Sanchez could easily be matching the scores set by Harry Kane and Salah this season. I’ve seen him fall to 9th/10th pick and even the second round in a lot of mock drafts. If he falls to you anywhere around there, don’t hesitate to get him in.

This season sees a lot of newcomers into the forward category, meaning the top 10 in these ranks can all be considered as elite picks. Sadio Mane and Leroy Sane are probably the most notable of those to switch from M to F.

There’s so much potential in the forward line this year, mainly due to the previously mentioned position changes. I still expect to see most of these forwards (probably the first 12 or so) fly off the board in the first 20 picks, meaning there will be plenty of talent left in the later rounds.

Quite and few “ifs” and “buts” will need to be fulfilled here but in the second half of these rankings, I love the potential of Gabriel Jesus, Anthony Martial, Pedro and Daniel Sturridge.

Pep Guardiola toyed with a 3-5-2 formation at the start of last season with Jesus and Sergio Aguero at the sharp end until Benjamin Mendy’s serious injury. And rumours are flying around that the master tactician is planning to do the same which would boost the Brazilian’s value considerably if true.

Martial’s value much depends on a move within the Premier League. With his relationship with Jose Mourinho seemingly past breaking point, the Frenchman’s minutes may be even more limited than before should he stay at old Trafford but if the links to Tottenham and Chelsea prove to be true he suddenly becomes a viable option. A move to London would almost certainly see him go from bench fodder in your FPL roster to your FWD1.

With the futures of Eden Hazard and Willian uncertain and Alvaro Morata still yet to collect the shooting boots that he left in Spain, Pedro looks to be the safest way into the Chelsea attack, certainly for the start of the season at least. Plenty believe new Blues boss Sarri will revert to a “false 9” formation and the little Spaniard may even be favourite to take this position. His hot pre-season form was rewarded with a contract extension last week, all but confirming that Pedro is a big part of Sarri’s plans this season.

As comebacks go, Daniel Sturridge earning his place back in the Liverpool squad is a pretty good one. Plenty have questioned the injury prone striker’s attitude in the past couple of seasons but Sturridge’s determinations and good form in pre-season hasn’t gone unnoticed. With the deal for Nabil Fekir all but dead, the vacant number 10 position may result in more minutes for the England man, whether that be at the point of the team with Firmino dropping into the hole or Sturridge playing the deeper role himself.

If you can draft a top midfielder first, you’ll almost certainly be left with a top forward when it comes back to you in the second. In a ten team league, there will be a maximum of 30 starting forward. My strategy would be to get your FWD1 under your belt in the first two rounds, stack the midfield in the next couple of rounds (while keeping an eye on how many forwards leave the pool) and come back in for your next two forwards. In my 12-team league, I finished up with a front line of Aubameyang, Martial, Deulofeu and Hoilett which I was very pleased with.

The rush for forwards and the days of drafting Christian Benteke in the second round are finally over.

View all posts by Ipredictapayet