Wasn’t the best, meaning that the unthinkable has happened and Arsenal are starting a Premier League season without Arsene Wenger at the helm. Many will say it was only a matter of time, and they’re probably right, but it still feels odd, especially because the new manager’s name sounds nothing like “Arsenal”.

Unai Emery is the man to take over: big shoes to fill indeed. The Gunners are used to looking out for the results of Man City, Man United and Liverpool (and Tottenham of course) so it would have been a bit of a culture shock for fans to be checking what was happening at Turf Moor on a Saturday afternoon. Sixth place and another Europa League is far from good enough for this great team. Emery will be given time but a return to the top four is still a must.

The talent Emery possesses in his starting eleven is exactly why securing Champions League football is a realistic (minimum) aim for this campaign. The front three of Aubameyang, Mkhitaryan and Ozil is up there with the best in Europe on its day (that being the key phrase). If Emery can get them all firing, expect Arsenal to be up there at the league’s summit come May.

Emery and co have been busy in the transfer market in an attempt to strengthen Arsenal’s soft underbelly. Laurent Koscielny is out for the foreseeable future, meaning that Sokratis P (search for his surname on the internet if you’re curious) has been captured to try and strengthen a creaking defence that leaked a less than satisfactory 51 goals in the league last season, 13 more than anyone else in the top 6. Highly rated German stopper Bernd Leno has been signed to replace the beleaguered Petr Cech who has definitely seen better days. We know what happened last time a highly rated German goalkeeper came to the Premier League.

Arsenal have been looking for the next Patrick Vieira for a while now. Abu Diaby couldn’t do it but maybe 5 foot 6” Uruguayan Lucas Torreira is the answer.

The new signings have a total of 0 Premier League appearances between them. It remains to be seen as to whether they can turn also-rans Arsenal back into the force they once were. 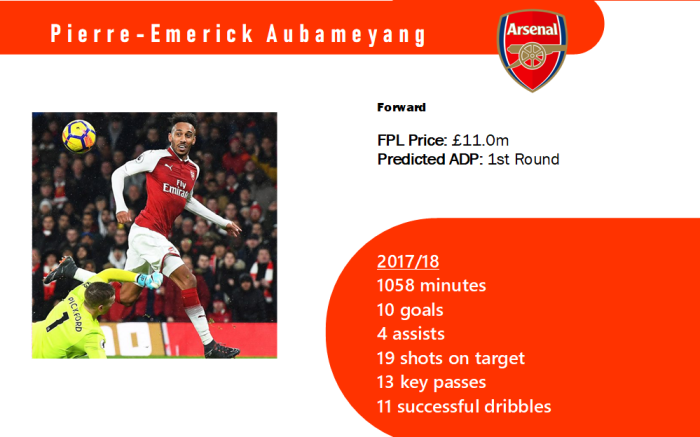 Apart from having the best name in the division, Pierre Emerick Aubameyang has all the attributes needed to become one of the great Premier League strikers. Ten goals in half a season last season shows that he will definitely be going toe-to-toe with Harry Kane and co in the race for the golden boot. His price of £11.0m in the official FPL game is steep but is well worth considering, especially once his first two fixtures are out of the way but in the draft game he is a nailed on 1st round pick. Don’t be surprised if Aubameyang’s goal tally is close to the 30 mark at the end of the season. 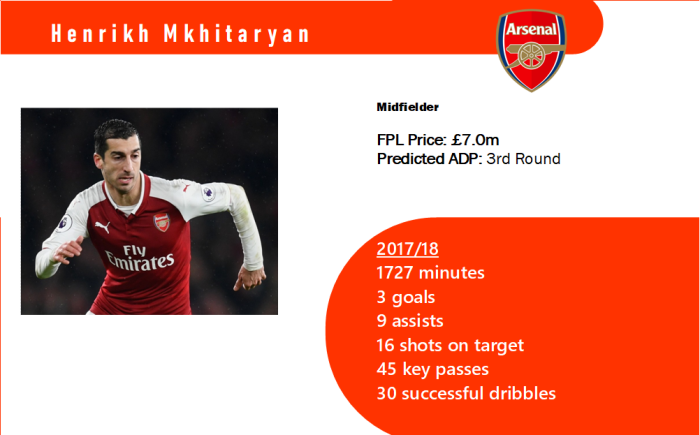 The word “enigmatic” was designed to describe footballers like Henrikh Mkitaryan. The same player who claimed a hat-trick of assists in a sparkling debut display against Everton last season can also go perform a perfect 90 minute disappearing act the following week. The Armenian is supremely talented but consistency is his downfall.  His price of £7.0m is, however, more than a little tempting. There will be days where Arsenal score five or more and Mkhitaryan will more than likely have had a hand in three of them. His high points ceiling means he should go in the 3rd round of most drafts. If you can put up with the blank gameweeks with the promise of future big pay days on the horizon, “Mikky” is your man.

Arsenal’s start is tough to put it lightly, but the fixtures that follow mean you can do worse than owning more than one of Emery’s men. Attack is the place to target as any of those front three, if not all of them, can at least get close to double digits in the goal and assist columns.

Emery has also spoken very highly of Aaron Ramsey, hinting at a more attacking role for the Welshman this season, and the signing of Torreira may give him even more license to roam forward. As for the extremely talented Alexandre Lacazette, it will be interesting to see how the new gaffer fits him into the equation as he is far too good to be sat warming the bench for the season at The Emirates.

Defensively, I’m yet to be convinced. Hector Bellerin should offer some attacking returns, as should Sead Kolasinac is he is given a second chance to prove himself. Shkodran Mustafi will have to improve dramatically while new man Sokratis will have to be a revelation if Arsenal are to be considered a tight defensive unit. The Greek man could be the one to own in advanced scoring formats due to his aggressive defensive style.

In summary, stack the attack but add the defence with caution.

View all posts by Ipredictapayet